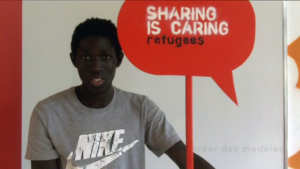 « I am Déogratius luron, from Uganda by nationality . i came to France in may 2015 and became a French refuge in June 2016 as a result of political affairs down in my home country. Because of my father who was a politician, it caused lots of troubles to the whole family, this came in form of mistreatment, torture and imprisonment that made us to split and moved to various places for safety. I manage to flew to Spain through a long time friend who managed to fund all my movement .

I arrived in Barcelona Spain in April 2015 i had nowhere to go unless start my own living and the situation was not favorable at all because it was hard to get something to eat and on top of that i was sleeping on the cold streets of Barcelona. After awhile i couldn’t manage the situation and had to look for somewhere else. I recall one day together with my friend who helped me out of Uganda got on a bus that was heading to paris France because we had no choice. On the night of our journey at the border of Spain-France, there was a police check point where we were requested to present our identities, we both pulled out our passports but unfortunately we were forced out of the bus and told to enter the police car. After a few minutes i was told to jump back onto the bus. So i had to do so and my dear friend was retained by the police because of un known reasons which i cannot figure out up to to date because i have never seen and heard about him anymore but i think because we were tresspassing and obtained expired visas, lucky enough i was at age of 17 years and maybe that’s the reason as to why i was not retained by the police.

Thereafter i had to get back in the bus and continue the journey towards paris but unfortunately i found myself in lyon where i stayed in the same situation like in Barcelona. I had no choice but to ask for asylum for safety. So when i asked for asylum, i lived in an asylum house, after the approval of my subsidiary protection for half a year because i was told that minors are not allowed to seek asylum. And when i made 18 in November 2015 i had to request for asylum because it was not say to stay without documents. So i handed in my request and i had to write my story and send it to OFPRA to wait for my interview. I recall in April 2015 i was called in Paris at the OFPRA head offices to discuss my story. It was not an easy task because i had to answer a lot of questions from the interviewer.

Further more, waiting for my response from OFPRA i experienced one of the difficult moments in life because i did not know the criteria and means that are followed to retain anyone as a recognized refuge. After a period of one month and some few days i received my responed that was positive.

On top of all that happened, i have lived here in France for a period of one year and six month but think about my fellow family members most especially my old poor mum who used to fall almost sick all the time and the young ones.

So i am trying to perform and carryout my personal activities and studies because even if the situation was hard i am still human who can work hard and perform different activities to live a better life like others. But my worry is to those who treat us in the most disrespectful way. We didn’t come here to steal one’s employment or something bigger but we want to have freedom and live a peaceful life. »